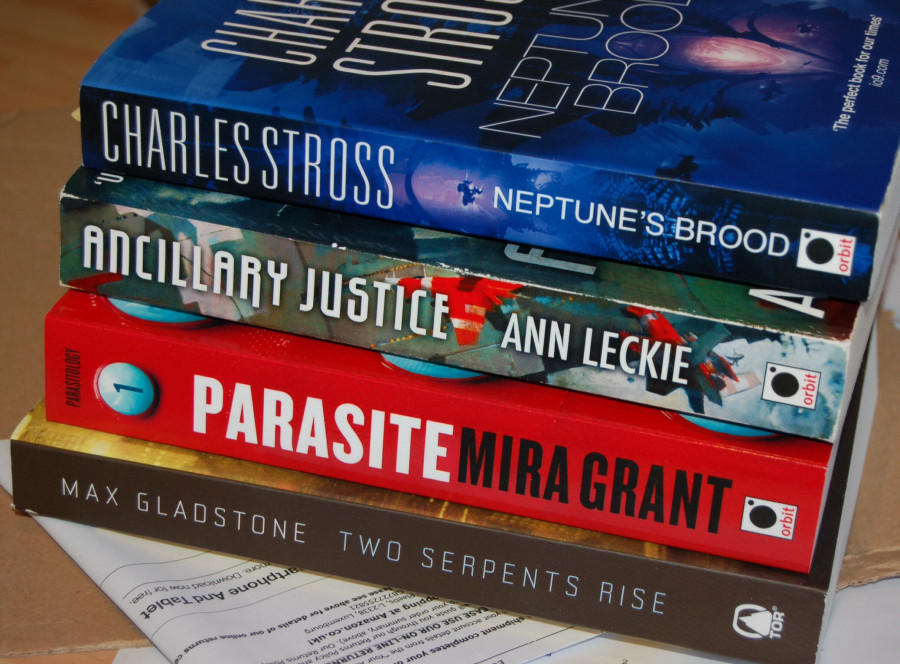 Janet's new deliveries and her reading pile. We've both read the Leckie, Janet's currently on the Stross ("bonkers, and I now know an awful lot more about banking than I used to"), Grant to follow, and the Max Gladstone because, well just because really. Janet loved Three Parts Dead.

Books I am currently reading:

'Confessions of a Conjuror' - Derren Brown. I'm not very far through it, but so far it's part autobiography, part free association -- an intriguingly stream of consciousness collection of thoughts and observations on magic, life, art and Brown's own past. The observations are framed by a well-written, painstakingly detailed account of an evening spent roving a restaurant as the house magician.

I've been reading a lot of non-fiction recently. The last fiction book I read was probably 'The Naming of the Beasts' by Mike Carey, the fourth in the enjoyable and intelligently pulpy Felix Castor series.

Book I am currently writing:

None unless you count my twitter account. (I did once write a fantasy novel in my teens, but the least said about that the better.)

Books I love most:

Tough call this. There are books I read and re-read obsessively in my youth, books that have moved me to tears, and books that have dazzled me. But the one that made the biggest impact on me in the last decade was undoubtedly 'The Demon-Haunted World: Science as a Candle in the Dark' by Carl Sagan. It's a book about open-minded skepticism, the spirit of scientific enquiry and the debunking of pseudoscientific thinking. It chimed with my views on the Universe so precisely, and helped to crystalise them. I've read other similar books since, but none that bettered it.

The last book I received as a gift:

'Why Evolution is True' - Jerry A. Coyne, probably the best pop science book I've read on evolution. Some of Dawkin's evolution books (such as Climbing Mount Improbable) are more rewardingly in-depth and feature more mind-blowingly complex examples. However as a comprehensive introduction to, and collation of the evidence for, evolution by natural selection this is far superior to Dawkins' 'The Greatest Show on Earth'. It's just a shame it's unlikely to ever be read by anyone who isn't already convinced.

The last book I gave as a gift:

'Emily Brown and the Elephant Emergency' by Cressida Cowell. A gift for my daughter whose seemingly inexhaustible thirst for 'stories' is highly pleasing (even if she's more than slightly obsessed with Miffy at the moment). We saw David Tennant read this book on CBeebies Bedtime Hour over Christmas, which he did brilliantly, subsequently dipped our toe in the water with the other books in the series, and followed up this one. A droll and witty book full of surreal imagination and a firm 'self-rescuing' type of heroine.

The nearest book on my desk:

'Servant of the Underworld' by Aliette de Bodard. It belongs to my wife whose seemingly inexhaustible thirst for books of all genres out-strips even our daughter's. According to the cover quote it's about an Aztec priest of the dead who tries to solve a murder mystery so I'm guessing it's the pre-Columbian equivalent of Cadfael.

Last book I bought for myself:

'The Final Solution' - Michael Chabon. A spare, elegant tale of Sherlock Holmes in extreme old age, and the spectre of the Holocaust.

We've been watching the Jeremy Brett Sherlock Holmes series from the start. We've just made it to 'The Final Problem', featuring Holmes's apparent death and the final appearance of Watson #1, whom I think I marginally prefer to Watson #2 for his eagerness and fantastically deadpan bemusement. I'm not sure what more I can say about Brett's merits as Holmes except that rewatching these episodes has reminded me just how very good he was in the role, particularly early on. Athletic, eccentric, rude, bursting with nervous energy, and the very image of what you want Holmes to be.

There's also a realism that this Granada series derives from having been shot on location that puts it streets ahead of any amount of over-dressed ye olde england sets, plush smoking jackets and fake pea-souper fogs. When you've seen Matt Frewer as Holmes (and generally speaking I have nothing against Matt Frewer) you realise just how badly wrong Holmes can go when treated like a Disneyland attraction. Brett's Holmes and the world he inhabits are perfectly real -- despite being inhabited by a parade of Victorian grotesques.

Despite all this I remain inexplicably positive about the ludicrous Guy Ritchie romp starring Robert Downey Jr. I put this down to an ability to compartmentalise.

On a related note I'm not sure how I missed this news that Steven Moffat and Mark Gatiss are making a modern day version of Holmes starring the improbably named Benedict Cumberbatch. If it weren't for the writers I'd dismiss this out of hand. With these writers, well, I'll give it a chance.

Plus they've just found the Giant Rat of (Somewhere Near) Sumatra.

Films 1 to 5 of 2009 (Defiance, Persepolis, Frost/Nixon, Valkyrie, Underworld: Rise of the Lycans) are reviewed here.

Bookwise I've completed His Dark Materials but that's it so far. Reviews to follow.

More books, probably the last of the year.

So that's 21 books this year vs. 9 last year. I set the bar low but I'm still pleased to have notched up more than twice as many as last year. I had a bit of a blip after The Little Sister in which I started two1 books2 which still languish unfinished on a shelf, which slowed my pace considerably.

My wife meanwhile notched up 38 books, vastly outstripping me as always and beating her tally of 35 last year.

1 Apocalypse How by Daily Show writer Rob Kutner, initially a very funny take on surviving the post-apocaypse, but one where the law of diminishing returns sets in very quickly.

2 Who Wrote the New Testament by Burton L Mack., a scholarly, secular attempt to reconstruct the actual beginnings of early Christian belief through literary and historical analysis, but one that for me feels nearly as much of a conjectural house of cards as the religion itself.

Hard to believe, but this brings me to twice the number of books I read in the whole of last year. Next: The Sparrow by Mary Doria Russell.

My book-reading pace has picked up again since last time.

So there you go. 14 books to date during 2008, precisely half the number my wife has read in the same period. I'd like to say I'll catch up, but it's a bit like Zeno's Paradox.

My wife asks me to put the following issue to the enlightened denizens of LiveJournal. Since I don't know any, I'm asking you lot.

For some time now (and specifically after seeing them on The Gadget Show) Janet has been considering getting an ebook reader.

However she does think that it would be cool to download books: it would save on shelf space, and it would be handy when going on holiday. Now that ebook readers use 'e-paper' that doesn't flicker or tire the eyes but looks just like printed text on a page, she's getting really tempted. It's this Sony model which has caught her eye.

On the plus side it looks decent, is small and light, gets good reviews and supports a variety of formats including the new standard "epub" file, audio and image files. Waterstones are promoting it and if she orders it by 3rd September you get 500 bonus points. They'll have more than 25,000 ebooks to buy from September. She could download new books instantly, and cart them around. Plus she'd be living in Teh Futur.

On the down side it's still pretty costly (circa £200), and the technology is still in its infancy so it could quickly become out of date (e.g. although it can display images the screen is currently only black and white). Also the files seem to generally come with DRM restricting how you can use them -- i.e. a max of six devices -- which seems like it goes against the spirit of a book. Most worrying of all, there are proprietary formats it can't play (including Amazon Kindle) so you can't necessarily just download ebooks from the US where they are plentiful. This last one is really what's made her stop and think.

Personally I suspect that I'd love to own one of these but I'd never actually use it. I'm also incredibly materialistic and like having shelves full of *things*. I still buy CDs, even though I immediately convert them to mp3. I'm also not keen on the inverted "negative" image you get for a moment whenever the page changes, which can be seen on this video.

Open to: All, detailed results viewable to: All. Participants: 9

Should my wife buy an ebook reader?

Have you bought / Will you be buying an ebook reader?

Which ebook reader should she get?

Opinions and anecdotes gratefully received. She'll probably ignore you and do what she was going to do anyway, but you never know...

I last did a books post waaay back in February. It's fair to say my pace has slowed a bit since then, but I'm still doing much better than last year.

Between the two Chandlers and the Chabon I feel like I've been on a bit of a crime kick recently. Since I'm currently reading the fourth Marlowe novel it doesn't look like it'll end any time soon.